SEM traffic is a bit like scotch whisky. You might think you’re getting a pure single malt from the glens of Google or Yahoo, when in fact you’re washing down a blend of different traffic sources. Sure, you’ll get the strong flavours of the world’s leading search engines, but often there’s an after taste of something else. And that’s not always pleasant.

The quality of SEM traffic from Yahoo has been under scrutiny for some time, in particular its network partners. So I’ve distilled the traffic from a campaign that runs on Yahoo and Google to see how they compare. Here’s the overall view: 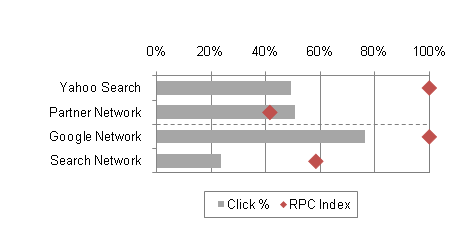 The grey bar represents the percentage of clicks of the whole campaign that come from either the search engine itself or one of its partner sites. The diamond shows the relative quality (revenue per click in this case), where the search engine itself is always indexed at 100%. Note that above Google and Yahoo are indexed independently; I’m not saying they have equal traffic quality.

The first thing to note is that both Yahoo and Google’s partner networks deliver significantly worse quality traffic compared to the engines themselves.

The second is that Yahoo is much more dependent on its partner network for total traffic than Google is.

Let’s look how Yahoo breaks down in detail: 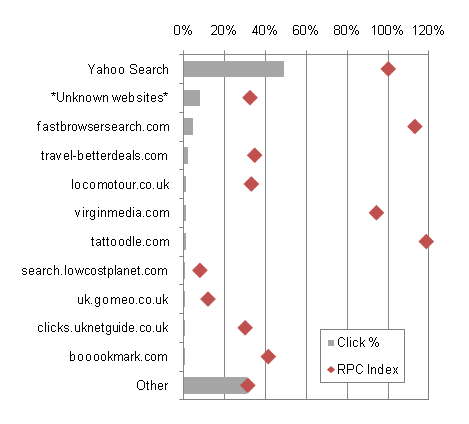 You’ll notice is that there’s not a lot of well known names. Those that are there don’t tend to convert as well as Yahoo does.

Aside from the unknown sites (which couldn’t be identified for various reasons), the largest partner is fastbrowsersearch.com, which is a toolbar. Surprisingly though, it converts better than Yahoo itself.

Contrast this with the data taken from the Google campaign: 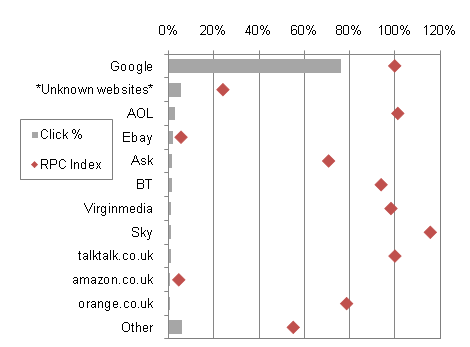 There’s lot of well known ISPs and portals there. Many of them convert as well, or even better, than Google does.

But there are two sites, Ebay and Amazon, which convert very poorly compared to Google. This may be due to the particular data sample. However many SEM professionals argue (myself included) that they aren’t search sites in the original sense and shouldn’t be in the Search Network.

Improvements To Be Made

I often say that there’s no such thing as good traffic or bad traffic. It is either correctly priced or incorrectly priced. That’s improvement number one: let SEMs break out, filter and bid on these different traffic sources separately, just as we can between Google Search and Content.

Yahoo introduced domain exclusion some time ago, though it’s somewhat unweidly in the current form. But that’s still better than Google, which gives you no such flexibility (even though you can do it easily on the Content Network).

Finally, Yahoo needs to adopt Microsoft’s Adcenter platform as soon as possible. The reason Google has such high quality sites such as AOL, BT and Sky is that it monetises the traffic much better than Yahoo does. From all the data I’ve seen, Adcenter can do an equal job to Google. It will give Yahoo much better commercial clout when negotiating distribution deals.